France is one of the most popular holiday destinations in the world. Thousands of people travel to this European country each year to witness the beauty of refined architecture, nature, culture, history and other things that make this country great. There is no doubt that every corner of France hides something special, but since your time as a tourist will be limited we will highlight some of the most interesting places in France.

Paris is one of the biggest and most populated cities in Europe with more than 12 million residents and hundreds of visitors on a daily basis. It is located in the north part of France on the Seine River. It was founded in the 12th century and until 18th century this was the biggest city in the western world. For centuries, this city was capital of art and culture. Things that you should see in Paris are Louvre Museum, Eiffel Tower, the national museum of modern art, Montmartre (the place where artists and bohemians gather), Elyse’s Palace, Notre Dame Cathedral etc.

This is actually a rocky island situated in the English Channel. You can find a Benedictine monastery on this island which is one of the best examples of Christian architecture in Europe. Of course, this is where the Le Mont Saint Michel village is located too.

Bordeaux is a city in France known for the numerous vineyards. This college city is located on the Garonne River in the southwest. The city was founded about 2300 years ago. 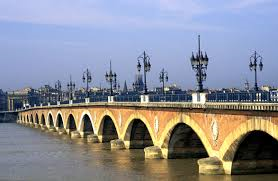 Caen is situated close to the shores of the English Channel in Lower Normandy. According to some historians, the city was created by the Celts because Caen comes from the Celtic words for battle and valley. Today, Caen is very popular destination.

This small city probably sounds familiar to you and the reason is simple – Evian water. It is located on the coast of Geneva Lake. The city got its name from the old French word meaning wet. The medicinal benefits of Evian mineral water were detected in the early 19th century.